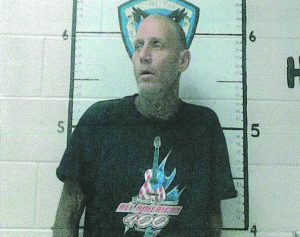 The reckless driver who disrupted the MCHS homecoming parade on September 23, by speeding down the parade route and endangering countless lives, including students and teachers, has been arrested. He faces numerous charges from both the Lafayette Police Department and the Tennessee Highway Patrol.

As previously reported, on Friday, September 23, the Lafayette Police Department received a call of a reckless driver coming off 52 West. James S. Corum, 52, of Lafayette, who was driving a 2007 Acura, first got around a parade barricade on Church Street and onto Field Street where Lt. Shane Reed tried to stop him. Corum eventually ended up on Sycamore Street where Sgt. Matt Looper got in front of him and also tried to stop him, but he hit Looper’s patrol vehicle in the rear end. After that, Deputy/SRO Aaron Shipley entered the northbound lane in his patrol vehicle near Central Elementary, and struck Corum’s vehicle ending the pursuit.

Bond for James Corum was set at $56,000. A General Sessions court date is scheduled for  November 16.

The Tennessee Highway Patrol has charged James Corum with driving on suspended license, DUI, reckless driving, not wearing a seat belt, no insurance and expired registration.