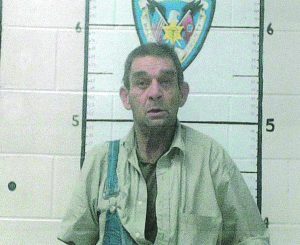 A 52-year-old Lafayette man was arrested last weekend for allegedly setting a barn on fire and pulling a knife on firefighters.

Law enforcement was called to the scene of a barn fire on October 30, 2022 by firefighters who reported a male subject with a knife.

The male subject was identified as Troy Centers.

According to an affidavit of complaint, firefighters were attempting to extinguish the fire when Centers began questioning them and shook a long knife at them.

Further investigation revealed that Centers resided in a camper trailer inside the barn.

Upon speaking with Centers, officers learned he believed he heard people outside of his camper and became frightened.

He told officers he lit a small piece of a paper towel on fire and put it inside of a container of Vaseline. He then threw the container outside of his camper window, which was still under the barn. The barn burned to the ground.

Mr. Centers explained he learned to do this in the army.

He was charged with arson and two counts of aggravated assault against a first responder.