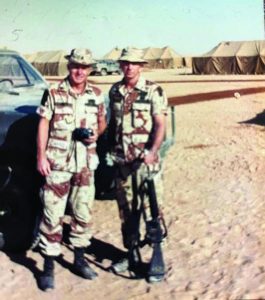 For a great many years our soldiers have went into the military and never returned, but in the case of James Calvin Smith, who was one of six brothers that served our country in the Army, they all lived to tell about it.

Actually, according to Calvin, who stopped by the Macon County Chronicle office last week, it is probably only one of the few times in Middle Tennessee’s history that six brothers have served, with over 65 years of service between them.

Through the years, one by one, they followed each other into the Army, leaving their Mom and Dad, the late Aubrey and Ruth Smith, fearful for their sons’ lives.

You don’t go through a war without some harrowing experiences, and Calvin Smith was no exception.

Calvin entered the Army in 1969, and received his basic training at Fort Campbell and his infantry training at Fort Polk, Louisiana. On August 16 of that same year, Cpl. Smith was en route to Thompson-Knute Air Force Base in Saigon, Vietnam. Because the base was under enemy fire when his plane landed, Cpl. Smith was quickly introduced to a foxhole. He soon joined other elements of the 101st Airborne Division located near the DMZ. For approximately 60 days his unit was constantly engaging the Viet Cong in fire fights with casualties being regularly incurred.

During a 23 day period while in the Ashau Valley, Cpl. Smith’s unit was surrounded by superior numbers of Viet Cong, and comrades were dying every day. Much of the time the fighting centered around a hill known as Fire Base Rip Cord. During an intense battle Cpl. Smith and his close comrade went down the hill for a new supply of ammunition. On their way back up a mortar shell exploded in front of them, and his buddy, who took the brunt of the explosion, fell backwards into Smith’s arms and he carried the soldier up the hill to a medi-vac helicopter. Smith later learned that his friend had survived.

On August 16,1970, Cpl. Smith flew back to Washington. Six months later, he was honorably discharged and returned home to Tennessee.

In March of 1983, Calvin was among the first 20 members to join the newly formed Tennessee National Guard as a Staff Sergeant. It was Quartermaster Company 1175.

When the Persian Gulf outbreak occurred, the 1175th was deployed to Saudi Arabia in the first wave of the American military buildup in late 1990. History has shown that Operation Desert Shield soon gave way to Desert Storm. The 1175th was federalized for 10.5 months and the unit returned to Macon County intact. Calvin decided not to re-enlist on March 24, 1992.

Smith received numerous awards and medals in both Vietnam and Saudi Arabia.

This article is a tribute to Calvin’s parents, inspired by his love, respect and wonderful memories of them. “My Mom and Dad raised 14 children altogether, and they spent many sleepless nights when we were in the service,” said Calvin. “They were the best.”