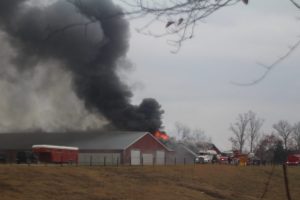 Multiple fire departments responded to West Road in Red Boiling Springs, on Monday, November 28, when fire broke out in a chicken house and spread.

It was quickly reported over the scanner, to responding fire crews, that there was a diesel generator and four propane tanks close to the fire. Heavy black smoke could be seen from several miles away.