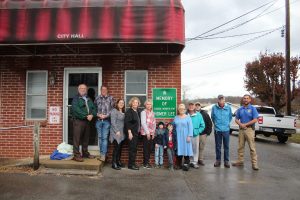 On Tuesday, November 29, the old City Hall building, located in downtown Red Boiling Springs, was dedicated to the late council member/EMT Homer Lee, who passed away in 2003.

Lee was born in 1927 on Jennings Creek in Macon County, and he was the son of Charlie & Beecie Hudson Lee. In 1947 he married Mary Alice Bartley and they had four children – Dorothy (Dot), Larry, Melissa, and Linda.

In 1956 Homer opened a barber shop in Red Boiling Springs, which he operated for 40 years.

Homer’s interest and support for Red Boiling Springs started early, and he supported the high school basketball team by giving free haircuts to players when they scored a set number of points. He became a volunteer fireman, rescue squad member and strong supporter of local business and politics. His interest in local politics led him to become a city councilman and he was a county commissioner from 1978 till 1982.

His care for the people of Red Boiling Springs was once again evident when he went back to school in his 40’s to become one of the first EMT’s in Macon County, during the 1970’s. He worked out of home for years and was on call 24/7. Homer gave up family activities, celebrations and holidays to help others. And he was known for giving money out of his own pocket to families when they needed help in emergency situations.

Homer knew the people he helped. He knew where they lived, their parents or children, their medical conditions and what they did for a living. No matter their station in life, Homer never looked down on anyone. People knew when help came it was from other “regular folks” in the community – a face they recognized and knew. He was also a strong supporter of the schools in Red Boiling Springs. He fought against consolidation – but he wanted better facilities, conditions, and equal opportunity for the students at Red Boiling Springs. A special charity of Homer’s was the Shriner’s annual paper sale. He worked for years for this charity to repay the kindness and help his own family received when they were in need.

The family is very proud of Homer’s service to Red Boiling Springs and area over the years. “We extend a thank you to the city for this honor. We are all proud to be from Red Boiling Springs. You all knew Homer as an EMT, barber, fireman or perhaps you didn’t know him at all – but we only knew him as Daddy.”