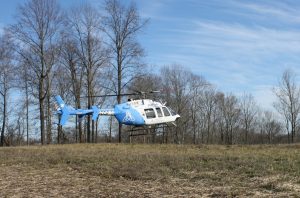 The Tennessee Highway Patrol investigated a two vehicle crash on Saturday, January 21, at 2286 Cold Springs Road, that resulted in 32-year old Tara Hobdy and one juvenile being airlifted from the scene to Vanderbilt University Medical Center, three other juveniles transported by ground to Vanderbilt and 20-year-old Tristain Brown carried by private vehicle to Macon Community Hospital.

According to the report from the Tennessee Highway Patrol, Tristain Brown, of Lafayette, was traveling north on Cold Springs Road in a 2002 Dodge Ram 1500 and Tara Hobdy, of Gallatin, was traveling south on Cold Springs Road in a 2005 Chevrolet Suburban. There were four juvenile passengers in the Hobdy vehicle. The report states that the Suburban crossed the double center yellow lines and when the driver of the Ram saw this action, he swerved into the southbound lane of travel. The vehicles struck each other head on in the southbound lane. Both vehicles came to final rest in the middle of the road.

According to EMS Director Randy Carter, there were four Macon County ambulances on the scene and one Sumner County unit. “Several off duty personnel came in and covered, and assisted at the scene as well,” said the Director.