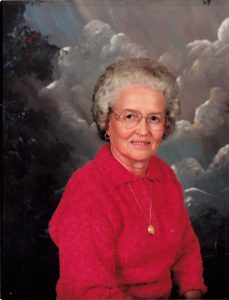 Doris C. Bilbrey Jackson was born May 17, 1927 in Clay County, Tennessee, one of nine siblings born to the late Edward “Ed” & Ada Condra Bilbrey. She married the love of her life, Robert Jackson, who preceded her in death. In addition to her husband and parents, she was also preceded in death by sisters, Dorothy Sissom, Evelyn Brown, & Lexie Shuppard, twin sisters, Lorene Long & Dorene Bilbrey, brother, Donald Bilbrey & daughter-in-law, Judy Jackson. Doris was a garment factory worked and was a member of the Bakerton Church of Christ.