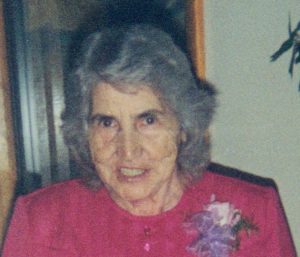 Geraldine Deckard Blankenship was born on February 5, 1931, in Clay County, Tennessee,
to the late Perry M. Deckard and Elizabeth Borden Deckard. She was one of four children born to this union. Geraldine married Mr. Jessie R. Blankenship and they were blessed with two children and several years together before his passing on September 22, 1968.

Along with her dear husband and parents, Geraldine was also preceded in death by her Sister, Golda Turner; Brothers, James W. Deckard and George P. Deckard; and Son-in-law, Mike Bell. Ms. Geraldine was a member of Corinth Church of Christ and she was a homemaker. She delighted in taking care of her family. Geraldine always loved gardening. She also loved playing the guitar and singing. Geraldine enjoyed spending time with her family, grandchildren, and great-grandchildren. On Friday, December 2, 2022, at the age of ninety-one years, nine months, and twenty-seven days, Geraldine Deckard Blankenship was called to her Heavenly Home.