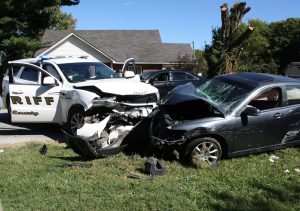 In an act of heroism, School Resource Officer Aaron Shipley prevented a tragedy on Friday afternoon, after he used his patrol vehicle to ram the car of a reckless driver on Sycamore Street, who was speeding down the parade route heading toward Central Elementary, where students, teachers and other spectators were waiting outside to watch the MCHS homecoming parade.

According to Police Chief Stacy Gann, “The first call came in as a reckless driver coming off 52 West and the next thing we knew the suspect, later identified as 53-year-old James S. Corum, of Lafayette, was on top of us and on the parade route.”

“Corum got around the barricade on Church Street by driving between Jerry Brooks’ building and the Tri-County sub-station and onto Field Street, where Lt. Shane Reed tried to stop him or slow him down. He went around another barricade, turned on Bratton Avenue, and kept driving toward Scottsville Road, where he turned toward the square. He turned onto Doss Avenue, to Green’s Automotive back parking lot and came out on Church Street. He turned into the grass behind the Baptist Church, going through the wooded area and into the field, and then back on to Field Street. This time he went up Sycamore Street where Matt Looper got in front of him and tried to stop him and he hit Matt’s patrol vehicle in the rear end. After that, Aaron Shipley entered the north bound lane in his vehicle and rammed Corum’s car.”

“Nobody was chasing him, we got a call on him as a reckless driver, like we get everyday,” said Chief Gann.

According to the THP report, James Corum was driving a 2007 Acura four door car. He was life flighted to Skyline Hospital in Nashville. Aaron Shipley was transported to Macon Community Hospital with minor injuries.

The following charges are pending: two counts of vehicular assault, one count of reckless endangerment, 1 count of evading arrest, driving on suspended license, violation of registration law and proof of insurance.

Interim Director of Schools Daniel Cook, posted this statement the day of the parade on the Macon County School District Facebook page:

During today’s parade, an uncontrollable driver came through the parade route. Macon County Sheriff’s Department, Lafayette PD, and other city agencies responded to this situation. A Macon County Sheriff’s Deputy rammed the driver preventing injuries to any students. The parade was stopped, buses began routes, and students were dismissed at 2:30 p.m. Macon County Schools is so appreciative of all responders and the quick reaction by the faculty and staff of LES and Central Elementary that prevented this from becoming so much worse. Several of our students are upset due to witnessing this situation. Each school will be prepared to address counseling concerns, etc…at the beginning of next week.

The Tennessee Highway Patrol preliminary crash reports states that to avoid death and serious bodily harm to students and teachers outside to observe the parade, Deputy/SRO Aaron Shipley entered the northbound lane in his patrol vehicle striking the Acura car, driven by James Corum, ending the pursuit.