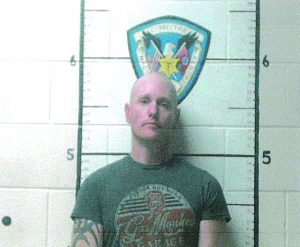 According to the affidavit of complaint filed by Deputy Patrick Berry of the Macon County Sheriff’s Department, he was watching RBS Market on November 4, 2022, when he witnessed what he believed to be a drug deal take place between a man and woman in a white van, with expired tags, and a man and woman in a silver Explorer.

Deputy Berry recognized the man in the silver Explorer as Jeffrey Long, who he believed had possible warrants out for his arrest.

Both vehicles drove onto Lafayette Rd. towards Hwy 52 after the officer witnessed an exchange between them, and a RBS police unit was called to assist Officer Berry as he conducted a traffic stop on the white van on King Hill Rd.

At that time, the Silver Explorer turned around and took off, and an RBS officer conducted a traffic stop on the vehicle at the top of King Hill Rd.

Detective Josh Meador and K-9 Loki assisted RBS police, and a positive alert for drugs was given by the K-9 on the passenger side of the vehicle.

Jeffrey Long and Briana Wilson were then detained by law enforcement, and it was discovered they both had active warrants for their arrests in Macon County. Long also was found to be driving on a suspended license.

As Long was being placed inside of a police car, a smoking pipe fell from his pant leg and broke open, exposing a white, crystal-like residue. When asked if he had anything else in his possession, he stated that he did not.

After taking Mr. Long into the jail for booking, transporting officer Deputy Berry, went back outside to check the backseat of his patrol car, which he routinely does when he has someone in his unit.

The officer discovered a white crystal-like substance in the backseat and under the seat, on the floor. The substance field tested positive for methamphetamine.

Long was charged with possession of methamphetamine, driving on a suspended license, possession of drug paraphernalia and failure to appear. His bond was set at $16,000, and he is scheduled to appear in general sessions court on Dec. 7, 2022.

Ms. Wilson was charged with violation of probation and was given a bond of $1,200. She is scheduled to appear in general sessions court on Nov. 9. 2022.