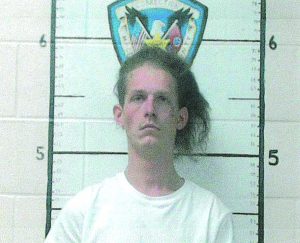 According to a report filed by arresting officer Patrolman Taylor Boxold, of the Lafayette Police Department, he was called to the scene of the Tiger Fuel gas station on October 7, 2022, following a report that a subject was attempting to pass counterfeit money.

After arriving on the scene, he approached a blue car at the gas pump and advised the male driver to step out of the vehicle.

A pat-down of the male individual was conducted, and the officer felt an object that he believed to be a pipe, in one of his pockets.

The man, identified as Jonathan C. Poole, told the officer it was a meth pipe after being questioned about the object.

Officer Boxold asked Poole if he had any narcotics in his pockets, and Poole advised that he had methamphetamine and cocaine in his right pants pocket.

While Poole was being taken into custody, he reportedly rammed his head into the side of a police car before being escorted to the Macon County Sheriff’s Office for booking.