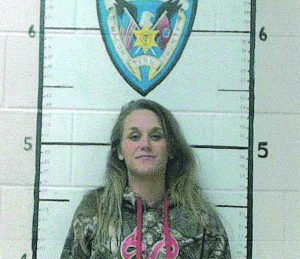 A Lafayette woman was arrested on multiple drug charges after local law enforcement discovered heroin, methamphetamine and fentanyl in her vehicle during a traffic stop.

According to the Affidavit of Complaint filed by Macon County Detective Jason Sells, he was on patrol on October 20, 2022 when he witnessed a red Pontiac with a tag that did not match the vehicle description provided by dispatch.

After initiating a traffic stop, the driver of the vehicle, identified as 24-year-old Kristen Templeton, stated that the vehicle was not registered yet and she did not have insurance on the vehicle.

Following positive indication on the vehicle by a drug K-9, the Pontiac was searched and the following items were discovered: a used methamphetamine pipe, five small plastic baggies, 40 hypodermic needles and two digital scales.

Ms. Templeton then handed Officer Sells a container she was hiding on her person. Inside was approximately 0.5 grams of fentanyl, 1.03 grams of methamphetamine and 1.5 grams of heroin.

According to the report, Templeton also stated she bought the drugs, used the drugs and sells drugs.

The vehicle and over $100 in cash was seized by law enforcement, and Templeton was taken into custody and transported to the Macon County Jail, where she was charged with manufacture, delivery or possession of meth, manufacture of narcotics (2 cts.), possession of drug paraphernalia, license plate displayed on wrong vehicle, driving an unregistered vehicle, and financial responsibility violation.

Her bond was revoked, and she is scheduled to appear in general sessions court on November 16, 2022.