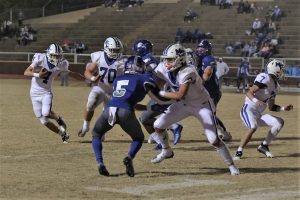 The Macon County Tigers ended their 2022 campaign with a first round play-off loss to the Red Bank Lions. The Tigers were the #3 seed in Region 4-4A while the Lions were the #2 seed in 3-4A.

The Lions got on the scoreboard first at the 2:51 mark of the first quarter. Macon would answer with a 10 play 80 yard drive with Gabe Borders scoring on a one yard run. Bryson Higgins kicked the extra point and the game was tied 7-7 with just under 10 minutes left in the half.

After the teams traded the next two possessions, Red Bank scored on a 51 yard rush to lead 14-7. Following a Macon fumble Red Bank would attempt a 33 yard field goal, which was no good.

Macon just couldn’t get their offense going. The Lions would add another score with 6:36 left in the third period to lead 21-7. With 1:14 left in the game Kyle Shockley hit Gabe Borders for a 33 yard touchdown. Higgins would make the PAT and the final score was Red Bank 21 Macon 14.

Stats for both teams look even. First downs, offensive yardage, time of possession all are dead even. The difference was Macon was -3 in the turnover margin and Red Bank was able to finish their drives.

Mason Swindle led all defenders with 16 stops. Tyler Gregory had nine, Hayden Wix had six, Brody Frye had five, and Jo Jo Scott and Riley Bolton had four each.

The Tigers end the season with a record of 8-3, tied for first in the region but seeded #3 for the play-offs. Red Bank will move on and face Stone Memorial next week in Crossville in the second round.