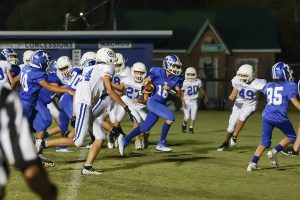 The Macon County Junior High Tigers were able to get two wins this past week. They made up a game with DeKalb County and held homecoming with Gordonsville.

On Tuesday Sep 13th Macon played a make-up region game against DeKalb County. Macon’s Brennan Flowers scored on a 48 yard run on the opening drive. Flowers made the two point conversion and with 7:11 left in the first, Macon led 8-0. Cooper Carlisle then scored on a 66 yard run but the conversion failed. Then with 4:53 left in the half Flowers scored again on a 36 yard run and added the conversion. At the break Macon led 22-0.

The only scoring in the second half was a three yard scoring run by Hunter Jones with 7:02 left in the game. The conversion was no good and Macon wins over DeKalb by a final of 28-0.

For the game Bradyn Hasse rushed three times for 14 yards, Brennan Flowers seven for 100 and two touchdowns, Cooper Carlisle three for 116 and a score, Anthony Johnson two for 50 yards, Hunter Jones three for 13 and one score, Hunter Presley one for 12, and Hadyn Hasse carried the ball two times.

Bradyn Hasse led the way on defense with eight tackles followed by Flowers with five, Luke Kostalek with three, and Xavier Bentley with three.

Coach Jett was able to get a lot of his bench in the game in the second half. However with the mercy rule in Junior High being 30 points, the second half went by rather quickly. Gordonsville did score late and Macon would also tack on a late score on a 57 yard run by Lane Oliver. Owen Pitts made the final conversion and Macon gets the win by a final of 40-6.

In the game Oliver led the way with three carries for 69 yards and a score. He was followed by: Flowers four carries for 38 yards, Bradyn Hasse four for 26, Carlisle three for 64, Johnson three for 64 and a touchdown, Jones one for two yards, Presley two for 37, Hadyn Hasse two for five, and Braxton Boles one for 8 yards.

Bentley and Cooper East led the defense with four tackles each. Flowers, Taylen Swaffer, Bradyn Hasse, and Boles each had two.

The Junior Tigers are set to close out their regular season with their final conference game at Livingston Academy on Tuesday Sep 20th. Kick-off is scheduled for 6:30 pm.