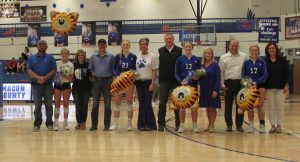 The MCHS Tigerette volleyball team won their final two regular season games. Heading into the post-season they finished with a record of 12-11.

It was also senior night to recognize the four young ladies who have played four years of volleyball. Cadence Carter, Allie Thompson, Ellie Coley, and Kenna Wyatt were all recognized with their parents in a ceremony after the game.

On Thursday Sep 29th Macon travelled to Greenbrier for their last regular season game, which happened to be a region game as well. The Tigerettes won the game over the Lady Bobcats in three straight sets and finished the season as champions of the regular season with a record of 7-1 in their district.

The Tigerettes are scheduled to move into the post-season next week at their district tournament.