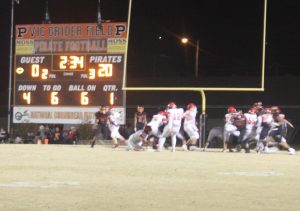 The Bulldogs received the opening kick-off and a fumble caused the Bulldogs to start their first drive at the 12 yard line. On their very first play from scrimmage Bulldog quarterback Aubry Link found wide-out Chris Hackney sprinting down the field for a 65 yard catch and run to put the Bulldogs in the red zone. On the second play of the game Link found Joe Birdwell all alone in the endzone but Birdwell just flat out dropped the pass. This mistake set the tone for the entire game. Birdwell came back to play very well in the game

The Pirates took over on downs on their 21 yard line and three plays later the Pirates scored on a pass play of 31 yards to take a 6-0 lead. The point after was no good. South Pitt intercepted a Link pass and returned the ball to the end zone for a td to give the Pirates a 12-0 lead with 7:48 left in the first quarter. The 14 Bulldog fans in the stands were shocked but they made noise the entire game.

The Bulldogs would score a touchdown in the third quarter aided by passes of 26 yards to Birdwell and 14 yards to Chris Hackney. The Bulldogs would not score again until 4:29 gone in the 4th quarter on a 14 yard pass to Hackney and the score at this point was 45-17 but the Pirates would add a late score for your final of 52-17.

Stats from the game were as follows. The Bulldogs coughed up the ball three times but they recovered two of those fumbles. Link passing was 15 of 32 for 271 yards. Tyler Lancaster ran 11 times for 49 yards and Dalton Dallas rushed four times for 45 yards. Hackney had eight receptions for 128 yards and Birdwell six catches for 127 yards.

One final note, Joe Birdwell was tackled late in the game and he was taken to a doctor and Joe may have a broken collarbone. We wish Joe a speedy recovery for the basketball season.