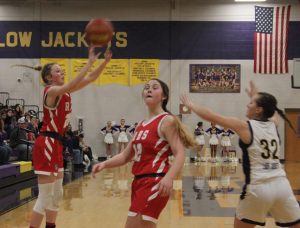 The Red Boiling Springs High School basketball teams made the short trip down to Trousdale County last Friday night. The Lady Bulldogs had no trouble with the Lady Jackets winning by a final score of 54-36.Trousdale County won the boys game defeating the Bulldogs 53-32.

Bre Thompson came alive in the second half scoring 10 points and claimed 10 rebounds in the game, a nice double-double for her. The one stat that turned this game into a runaway was the 13 second chance points in the third quarter. The Lady Bulldogs got great defense from Bailey Massengille who also had four total points. Kennedy Marshall pulled down six boards and four assists.

The Lady Bulldogs have a 3-0 season record and every team has played junk defense to try and slow down the Lady Bulldog offense but these girls have responded by taking what those defenses have allowed and managed to get points in the paint.

This game was close until the Jackets started driving to the basket and scored 14 unanswered points in the four quarter. The Bulldogs never figured out how to stop peneration by the Jackets plus a terrible shooting in the second half.

The Buldogs led this game 24-21 at halftime but the Jackets clamped down on defense holding the Bulldogs to only eight second half points. The last time the Bulldogs were held to eight points in the second half was 26 years ago against Pickett County.

Total scoring for the Bulldogs was: Hackney 13 points, Colton Copas 8 points, Aubrey Link 4 points, Nate Logan and Brenton Powell each made a 3 pointer and Aayden Cherry had 2 points.

Red Boling Springs will now return to the Dog Pound this Thursday night to face Van Buren County and the Jackson County visits on Friday night.