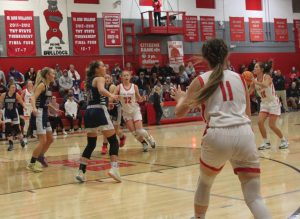 One of the dangers of scheduling high school basketball programs that are out of state is you never know how strong their teams are going to be come game time. Red Boiling Springs found out just how good the Monroe County KY girls and boys were last Saturday night in the Dog Pound at home.

The Lady Falcons won a hard fought game by a final score of 58-56 that was as exciting as any game played at home in a long time. The Lady Bulldogs gave a great effort but they showed signs of fatigue having beaten the Lady Owls of Smith County the previous night by a final score of 50-34.

The Lady Bulldogs jumped out to a 14-11 lead after the first quarter and trailed at the break 26-22. Both teams best players were in foul trouble by the middle of the third quarter as officials were calling a tight game. Claire Fleming led the Lady Bulldogs at halftime with 10 points and Bre Thompson and Bailey Massengille each had five first half points. The Lady Bulldogs shot 1 for 8 from three point range in the first half while the Lady Falcons were 4 for 8.

Bulldog Colton Copas was called for two technical fouls in the quarter and he was ejected from the game after the second technical, which is automatic. No explanation was announced but the Falcons shot free throws. Copas had 10 points and six rebounds when he was ejected. We asked the official about the reason for the ejection and no response was his answer.

With Copas out of the game the Bulldogs had to turn to Chris Hackney for most of the scoring and he scored 18 points. However the Falcons had just too much balance on the offensive end for the Bulldogs to keep up with.