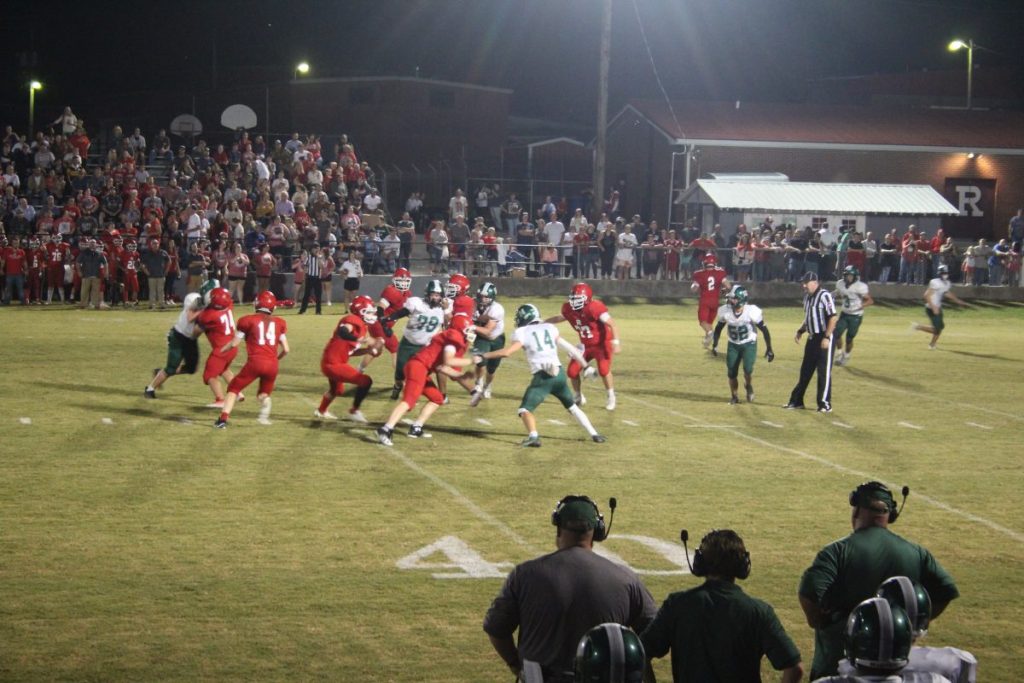 Last Friday night was a special game for the Red Boiling Springs High School football team as they beat the Huskies from North Greene by a final score of 39-12. There were records broken on this night but none of them were on the playing field.
North Greene received the opening kickoff and the Huskies drew first blood marching 71 yards in nine plays to score a touchdown and grab a 6-0 lead. The PAT was no good and with 9:34 showing on the clock the kids from Greenville led 6-0. The Huskies would not find the end zone again until the clock showed 1:39 left in the fourth quarter. The Bulldogs first two possessions resulted in dropped passes and a fumble but their defense kept the Huskies from mounting a drive.
The Bulldogs started their third possession on their own 34 yard line and Bulldog quarterback Aubry Link marched the Bulldogs down to the Huskies 14 yard line. On second down Link found Chris Hackney all alone in the end zone for a Bulldog touchdown. The PAT was no good and with 11:34 left before halftime we have a 6-6 score. The Bulldogs defense was playing much better in the second quarter when Dalton Dallas picked off a Husky pass and returned the interception to the Husky 49 yard line. The Bulldogs mixed up their running game and short passes to reach the Huskies four yard line and Link called his own number with a quarterback sneak into the end zone and the Bulldogs lead 12-6. The point-after was no good.
The Bulldogs offensive line were keeping Link safe and kids like 8th grader Jayden Huffines, sophomore Chris Martinez, 8th grader Hayden Wright, and sophomore Tanner Davis were doing a great job keeping Link upright. The Bulldogs Dalton Dallas had his second interception and the Bulldogs marched 57 yards for their third touchdown on a 50 yard pass play to Dalton Dallas for his second touchdown of the game. The Bulldogs lead 19-6 with 11:34 left in the third quarter. Kelby Wheeler picked off a Husky pass and Tyler Lancaster found pay dirt on a 27 yard run and with 8:50 left in the third quarter the Bulldogs led 25-6.
Wheeler picked off his second interception and the Bulldogs once again gave the ball to Lancaster who scored on an 18 yard run. The Bulldogs lead now stands 32-6 with the PAT being good. The Bulldogs final score was a 47 yard run by Dalton Dallas with 39 seconds left in the game.
A great team effort by the Bulldogs and the win moved the season record to three wins and two losses. It was great to see the record broken for attendance. Over 650 paid attendees were on hand to watch the game and all the festivities.

The Bulldogs will travel to play Whitwell this Friday night Sep 23rd.