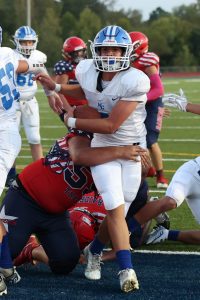 The Macon County Junior High Tigers won two games this past week. One was the final game of the season and the other was the first round of their playoffs.

On Sep 20th the Junior Tigers travelled to Overton County for their final game of the regular season. Cooper Carlisle got the scoring started with a 44 yard touchdown run with 1:02 left in the first quarter. The conversion was no good. On the next possession Brennan Flowers scored on a five yard rush and he made the conversion to give the Tigers a 14-0 lead. On the next possession, barely a minute and a half later, Hunter Jones hit Carlisle on a 10 yard touchdown pass while Jones sneaked-in the conversion to make it 22-0. With just 0:24 seconds left in the half Anthony Johnson scored on an eight yard run and Bradyn Hasse made the conversion to make it 30-0 at halftime.

In junior high if you have a 30 point lead in the second half, the mercy rule keeps a running clock. The only scoring in the second half was a recorded sack by Jones, which resulted in a safety, with 5:52 left in the 3rd period. Final score Macon County 32 Overton County 0.

The Tiger defense wasn’t on the field for many plays. However Xavier Bentley led the way with three stops and one sack. He was followed by Jaidee Hymon, Cooper East, and Oliver with two tackles each.

Macon would finish as the second team in the West Division of the Middle Tennessee Football Conference which would earn them a play-off spot. They would travel to take on the #1 seed Avery Trace Raiders who were undefeated.

Macon traveled to Cookeville High School on Saturday Sep 24th to face the Raiders. Macon would capitalize on their first offensive possession as Flowers would score on a three yard rush. Flowers made the conversion and with 4:56 left in the half Macon led 8-0. After a quick three-and-out by Avery Trace, Macon struck again. Johnson scored in a five yard run while Flowers added the two point conversion making it 16-0 at the break.

Both teams had limited success in the third quarter. With the Raiders driving, Flowers was able to record an interception with 3:21 left in the game, which secured the win. However Jones would add another score with 1:14 left in the contest. Final score Macon 22 Avery Trace 0.

This will set up a championship game on Thursday Sep 29th at Sparta against White County. The Junior Warriors handed Macon a 28-6 loss back on Aug 2nd in the season opener in Lafayette.