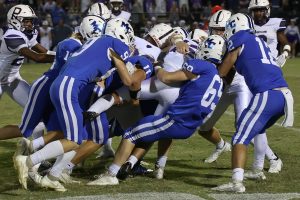 The Macon County Tigers ran their season record to 6-0 with a dominating win over the Portland Panthers by a score of 42-15.

It was Homecoming 2022 for the program and was a renewal of the oldest rivalry in the Macon record books.

Following a defensive stop by Macon, they struck on their opening possession. With 6:49 left in the 1st Kyle Shockley hit Braylon Flowers for a 71 yard touchdown pass. Bryson Higgins added the PAT and Macon led 7-0. On the next Tiger possession Gabe Borders scored on a 57 yard rush and Higgins added the kick. In their most prolific opening quarter of the season the Tigers struck again on a halfback pass from Luke Gammon to Borders for 53 yards to pay-dirt. Higgins PAT was good and Macon led 21-0 at the end of the first quarter.

Portland would score in the first minute of the 2nd period. However the Tigers would answer with a four yard touchdown run by Tyler Gregory with 7:54 left in the half. Higgins kick would make it 28-7 but Macon wasn’t done. Shockley hit Borders for a 77 yard touchdown pass with 1:54 left in the half. Higgins added the extra point and Macon led 35-7 over Portland at the break.

The Tigers got the opening kick-off and marched 66 yards in eight plays with Borders scoring on an 18 yard run. Higgins PAT would give the Tigers a 42-7 lead and start the mercy rule clock.

Portland would tack on a late touchdown in the final minute. Macon records a dominate homecoming win over the Portland Panthers by a final score of 42-15.

The Tiger defense was superb. They only gave up 175 yards total in the game to a team that had been posting big scores. They also held the Panthers to just 2 of 10 on third downs and 19:20 minutes of possession in the 48 minute contest. Mason Swindle led all tacklers with nine, followed by Jo Jo Scott with seven, Borders with five, and Dalton Slayton, Brody Frye, and JB Carter with four each.

This sets up a huge game next week at home. The Upperman Bees were the consensus pick to win Region 4-4A. However the Tigers will get them at Pat Parker Memorial Field next Friday night in a game with huge play-off ramifications. Kick-off is scheduled for 7 pm.