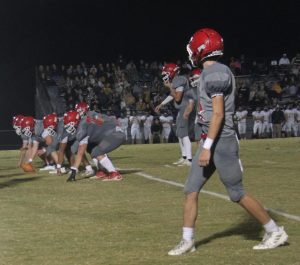 Most Red Boiling Springs football fans knew going in that the chances for a huge upset against Clay County were very slim. When Bulldog head coach Sean Link announced before the game that six players that started the first four games of the season were not going to play against Clay County last Friday night then all chances Red Boiling Springs had were now out the window.

Once again a sell-out crowd was on hand and the Clay County fans had something to cheer about early as the visitors received the opening kickoff and on the second play of the game Clay scored a touchdown that covered 61 yards. With 1:47 left in the first quarter Clay scored their 4th touchdown of the game and a 28-0 lead. Things would get worse.

Clay County has speed to burn and the home team had very little chance of stopping any play as Clay would add four more touchdowns. The Bulldogs had three passes intercepted that went for a score and a fumble that allowed Clay to add their 4th score of the quarter. The Bulldogs had 41 total yards of offense in the first half as Clay led at halftime 62-0.

The two head coaches along with the officials had a meeting before the second started and they decided to have eight minute quarters instead of the usual 12 minutes and there would be a running clock the entire second half. The crowd on both sides gave their approval and the Bulldogs received the second half kickoff and kept the ball the entire quarter but they did not score any points. The Bulldogs punted the ball away with 7:12 left in the fourth quarter. When have you seen a team have the ball for a whole quarter and not score a point?

The Bulldogs would dent the scoreboard for a touchdown on a 41 yard pass play from quarterback Aubry Link to wide out Joseph Birdwell. The PAT was good and with 5:51 left in the game it was 62-7. Clay County used reserves for the second half and they never attempted a pass the entire second half. The entire second half took only 21 minutes to complete.

Stats were not available after the game. The Bulldogs are not sure when any of the injured players would be back but Will Massey is not expected to play in the three remaining games. The Bulldogs will travel to Caverna this Friday night with game time at 7:00. See you at the game.