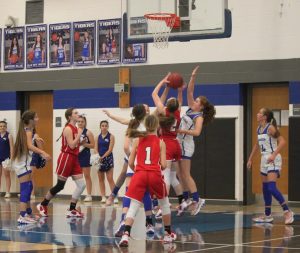 Macon looked a bit rusty coming off the holiday break and had a horrible time shooting in the first two quarters. Westmoreland led 11-6 and 15-13 at the break.

It became apparent that Macon was going to try and get more shots in the paint in the second half. After leading 29-22 heading into the final period, Westmoreland went cold shooting. After shooting 4 of 14 from the free throw line, point guard Sheridan Ellis made her last four free throws to ice this game. Final score Macon Co 40 Westmoreland 36.

The Macon boys also looked a little rusty. Westmoreland made five of their seven shots in the first period and then started launching the long ball, with little success. The Junior Eagles led 11-8 after the first quarter. Macon simply made more shots and at the break the Junior Tigers led 19-15.

Both teams struggled to score in the second half. Macon was able to pus to an eight point lead but Westmoreland brought it back to four. The Junior Tigers forced some turnovers and pushed the lead back out to 27-17 heading into the final quarter. Macon maintained that lead and the final score was Macon Co 34 Westmoreland 24.